LOAD UP! Because The Culling Of Humanity IS THEIR FINAL SOLUTION.. Mannarino

“There’s some dire predictions being priced in right now.“

Cryptos were broadly lower today with the notable outlier of Ripple surging early on... 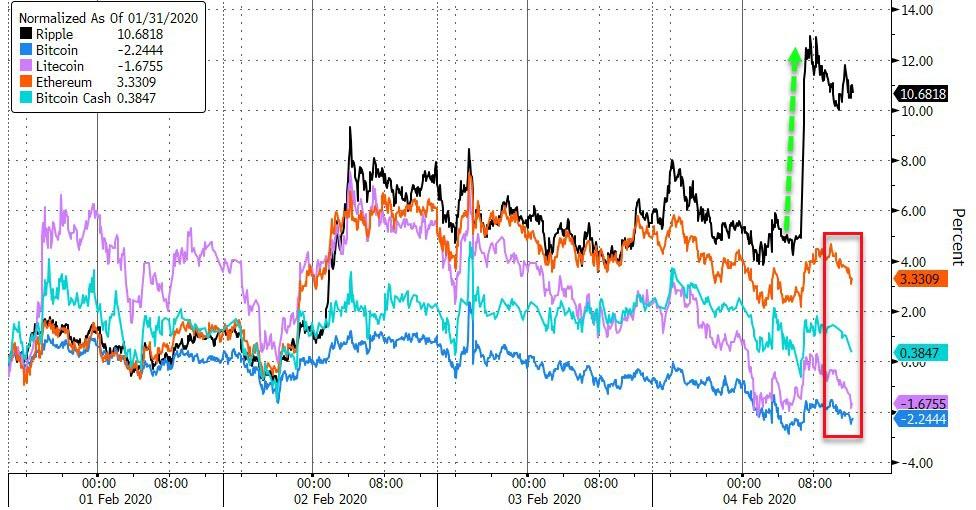 Copper was higher today (China liquidity) but PMs and crude were knocked lower... 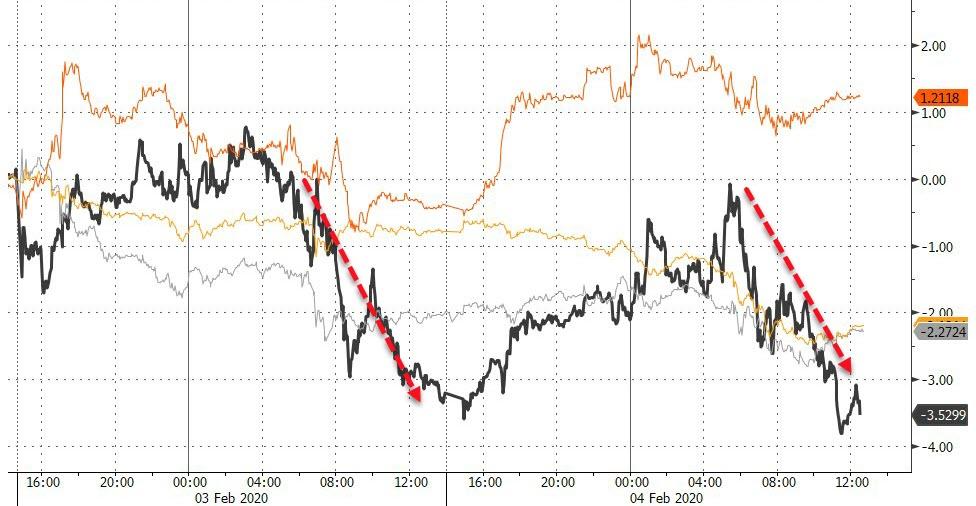 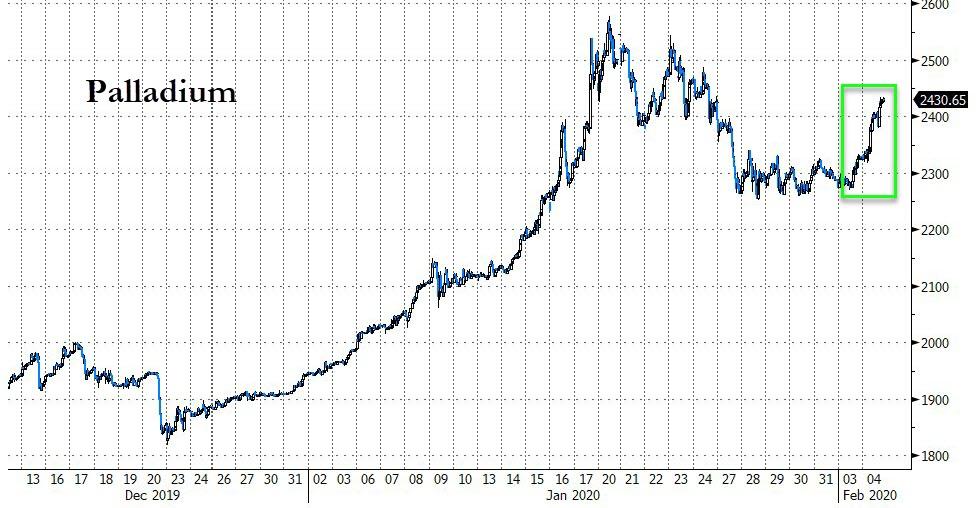 WTI traded down below $50...quite a swing from the Soleimani killing and Iran missile strike highs... 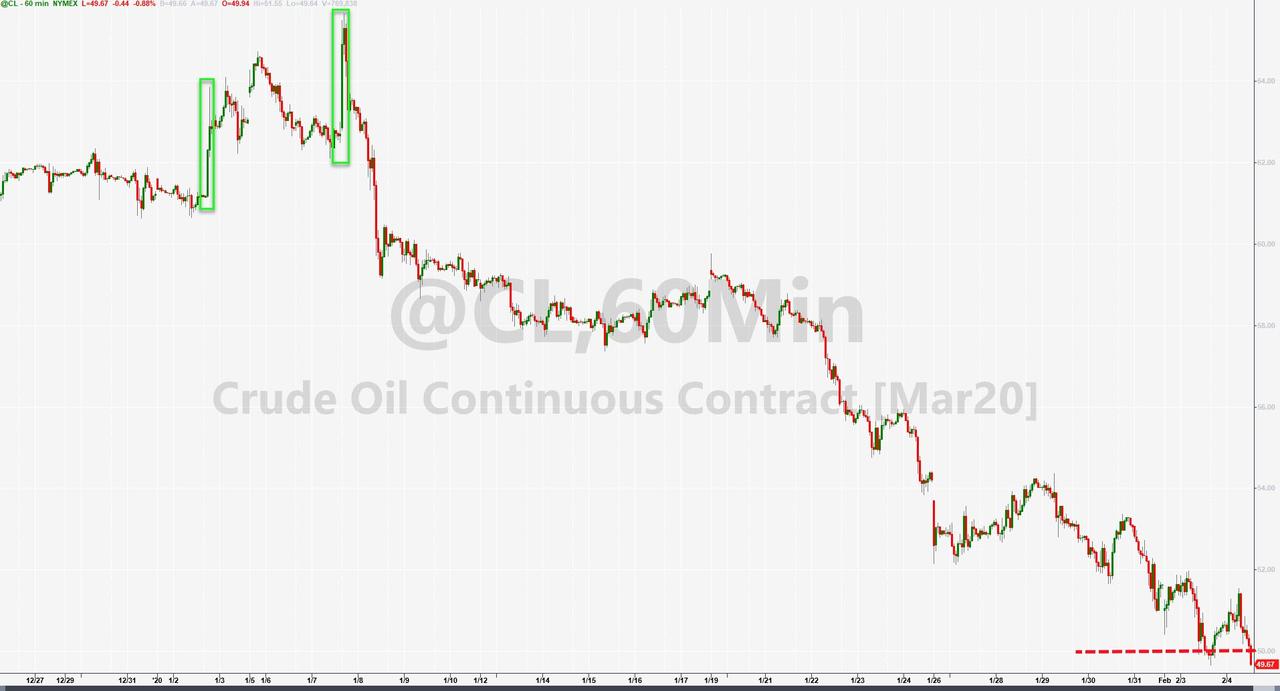 And while traders show no fear whatsoever piling into the most expensive and most overbought stock market ever, global gold holdings in ETFs has risen to record highs... 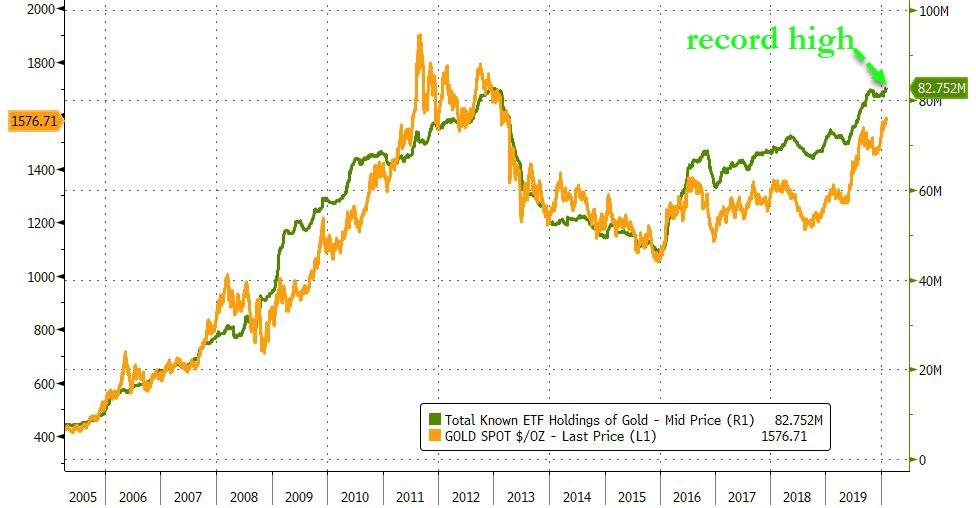 And finally, we note that, just like during The Fed's Y2K Liquidity splurge, Nasdaq has rebounded right on time... 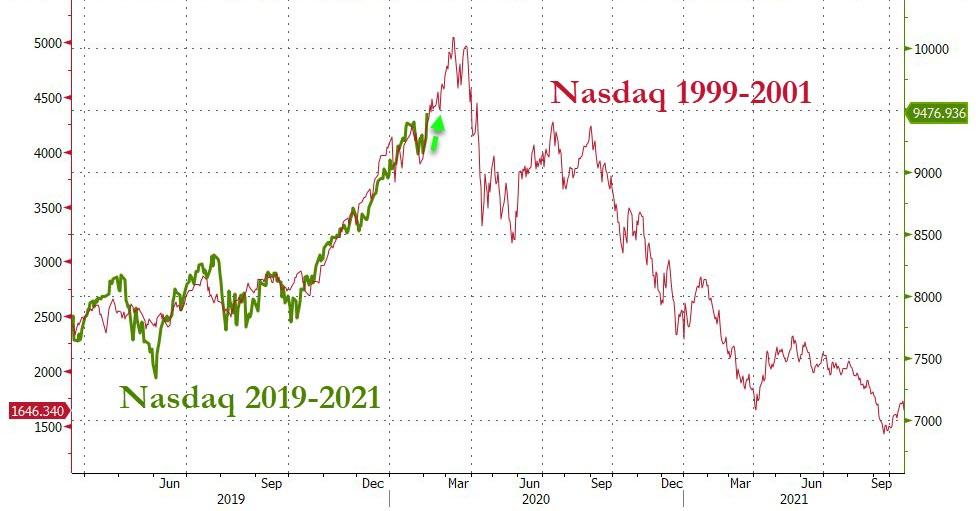 The emerging coronavirus pandemic is already crimping global commerce. In response, the S&P 500 has thus far put in two weeks’ worth of declines (the index fell 2.1% last week) since making new highs to start the year. Even though the U.S. stock market hasn’t even entered a true “correction” phase yet, Wall Street is already clamoring for more Fed stimulus...  https://www.investmentwatchblog.com/central-bankers-pull-out-their-monetary-bazookas-to-try-to-avert-a-coronavirus-crash/

"This will be a tough week for our team as we say goodbye to great colleagues and good friends."

Four US bases are prepared to assist the US Department of Health and Human Services (HHS) and house US citizens who may have been exposed to the Wuhan coronavirus overseas, Pentagon officials revealed Saturday...  https://governmentslaves.news/2020/02/03/pentagon-designates-four-additional-military-bases-as-coronavirus-quarantine-centers/

Most of us know of the atrocities conducted at Auschwitz by Josef Mengele during World War II.  However, very few people are aware of the equally horrendous human experimentation conducted simultaneously by Japan. A clandestine program conducted by the Japanese during World War II was responsible for the experimentation and genocide of hundreds of thousands of Chinese citizens as well as others, and ultimately led the Chinese to develop their own robust biological weapons program which is in full swing presently.  In this report, we will look back at the Japanese biological weapons program that started it all, and fast forward to the burgeoning Chinese biological warfare program today, which arose from it.

Special thanks to fellow researcher, The Speaker, for contributions to this report.

Biological Weapons of the Imperial Japanese

Following World War I, the Japanese imperialist policy of expansion through military and political tactics, led to the Japanese invasion of Manchuria in 1931, which some scholars site as the origin of the Second Sino-Japanese War.  This war between the People’s Republic of China and the Japanese Empire transpired amidst the backdrop of World War II.  Following the Japanese attack of Pearl Harbor in 1941, the United States declared war on the Japanese and began to aid China in their efforts.  After the devastation of the atomic bombs on Hiroshima and Nagasaki as well as the Soviet led invasion of the Japanese stronghold in Manchuria, Japan finally surrendered to the Allied forces.

It was within this time frame that Imperial Japan conducted covert biological and chemical warfare.  The clandestine project was overseen by a special department of the Japanese Imperial Army known as Unit 731.  Other biological and chemical warfare units connected to Unit 731 were founded in major Chinese cities, following the Japanese invasion in 1937.  At the peak of this operation, the entire network of biological and chemical warfare research units under Japanese Imperial Army control, comprised of approximately 10,000 doctors, professors, and biochemists.  This biological weapons research and development unit, which masqueraded as, the “Epidemic Prevention and Water Purification Department,” conducted horrendous human experiments, drawing comparisons between Unit 731 to somewhat similar experimentation conducted by Nazi German scientists at Auschwitz...  https://www.coreysdigs.com/health-science/burgeoning-asian-bioweapons/ (I have had information on Unit 731 for some time. Be sure to read this - the history of the depravity of human kind boggles the mind.)

On a tense, chaotic night, with the eyes of the nation trained on the Iowa caucuses, that state’s Democratic Party was counting on a slick new smartphone app to make everything go smoothly. The app was coded by a tech firm run by veterans of Hillary Clinton’s 2016 presidential campaign, one of them a former Google engineer. It was designed to meet new requirements instituted after that year’s contentious Iowa caucuses, in which Clinton narrowly edged out Bernie Sanders. To provide more transparency this time around, the state party promised to report not just the final results but voters’ initial and second choices as well. With so much more data to tabulate than in previous years, party leaders feared that the established system of reporting numbers by phone would be too slow. A proposal for a “tele-caucus” system enabling virtual voting was rejected as too vulnerable to hacking. An app that could instantaneously relay the numbers as soon as precinct chairs input them, developed by Democratic Party loyalists, looked like the perfect solution. It turned out to be a crushing failure... https://governmentslaves.news/2020/02/04/app-made-by-clinton-campaign-veterans-firm-is-behind-iowa-caucuses-debacle/

There were a total of 12 individuals who saw Anthony Weiner’s laptop computer, which contained incriminating information on Hillary Clinton and other powerful individuals in the United States.  9 of those 12 people, including the NYPD officers, are dead now...  https://www.investmentwatchblog.com/9-of-those-12-people-who-saw-anthony-weiners-laptop-are-now-dead/

Behind the app that delayed Iowa’s voting results is a dark money operation funded by anti-Sanders billionaires...

On January 31st, the House Civil Rights and Judiciary Committee voted to pass bills to ban most standard capacity magazines and make it more difficult to obtain a CPL. These bills will now go to the Rules Committee awaiting being pulled to the House floor. Please contact your state Representative and ask them to OPPOSE House Bills 2240 and 1315....  https://gunsinthenews.com/washington-house-committee-passes-mag-ban-cpl-restriction-bills/

Cigarettes Produce Invisible Chemical Emissions Even After They’ve Been Extinguished

Cigarettes aren’t just toxic when they’re being smoked. Even when the butts are scrunched up and cold, new research has found they continue to emit harmful compounds in the air. In the first 24 hours alone, scientists say a used cigarette butt will produce 14 percent of the nicotine that an actively burning cigarette would. And the airborne emissions don’t stop there. While most of these chemicals are released within a day of being extinguished, an analysis for the United States Food and Drug Administration (FDA) found concentrations of nicotine and triacetin – a plasticiser in cigarette filters – had fallen by just half a whopping five days later...  https://governmentslaves.news/2020/02/04/cigarettes-produce-invisible-chemical-emissions-even-after-theyve-been-extinguished/

Trump was visibly "shaken up" by the news...

Please keep in mind that the Rapture will happen after we have seen the Antichrist first. He will sign a security peace treaty with Israel (Daniel 9:27)... https://www.youtube.com/watch?v=rCR3akCfNG0