The Fed Has a Dangerous Repo Problem: Here’s the Charts 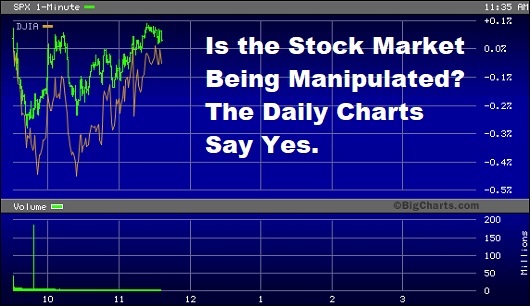 ...The stock market has set repeated new highs since the New York Fed turned on this multi-trillion-dollar money spigot that has been operating every business day since September 17.  The dangerous problems for the New York Fed are the following: it is creating an unsustainable bubble in the stock market; the larger that bubble grows, the more economic damage it does when it explodes; the New York Fed clearly had no exit plan when it began this dangerous experiment with no approval from an elected Congress.  Just how much the stock market is being manipulated was evident in yesterday’s chart for the Dow Jones Industrial Average and S&P 500 Index. (See above chart.) The markets plunged at the open; then staged an inexplicable sharp reversal rally; then plunged again – all before noon. We have watched this happen over and over since the New York Fed turned on its money spigot. There is a mantra on Wall Street that “the trend is your friend.” But there is no trend here. Markets can flip on a dime from plunging to spiking on no particular news. That strongly suggests there is a major player(s) pushing the market up using the Fed’s cheap money supply...  https://wallstreetonparade.com/2020/02/the-fed-has-a-dangerous-repo-problem-heres-the-charts/

The chaos has started...

"It's now clear that coronavirus is a serious event risk to the entire world and that financial conditions are tightening very quickly."

AND ANOTHER $42.75B Fed. Market Pump Plus! IMPORTANT UPDATES.. Mannarino

It’s hard to imagine what a worse week for Democrats would look like after this past week. The impeachment came to an abrupt halt with a thud. President Trump was not only not removed from office, but he was acquitted on both constitutionally fraudulent impeachment counts. The House ran a totally unfair impeachment hoax that was brought by a CIA officer and concocted with the help of Democrat Congressman Adam Schiff’s office.

The annual State of the Union (SOTU) address by President Trump was a slam dunk on the Democrats. More than 75% of people who watched the SOTU speech said they enjoyed and agreed with it. I called it a dunk-fest, and Speaker Pelosi did not enjoy it in the least. That’s why she publicly tore it up after the SOTU speech on camera for all the world to see. Pelosi may have just as well ripped the Democrat party in half in a very childish and dumb move.

Democrats should have thanked their lucky stars that so much was going on in Washington D.C. because what went on in the Iowa Democrat primary was an unmitigated disaster. There was chaos, confusion and charges of rigging the caucus votes to take away a victory from Bernie Sanders—again. Now, DNC Chairman Tom Perez is telling Democrats to recanvas the entire state of Iowa to make sure the vote is correct. How do you spell disaster? D E M O C R A T ! https://usawatchdog.com/impeachment-acquittal-sotu-iowa-are-all-dem-disasters/

While Trump's State of the Union speech did not overly focus on foreign policy, what he did say would have been music to neocon and pro-empire ears. Trillions for the US military machine and plenty of new enemies to gear up to fight. Plenty of elections to interfere with. Is this "America first"? Watch today's Liberty Report:https://www.youtube.com/watch?v=Y-_WZSWSFoQ&feature=emb_logo

even the mainstream media is admitting that the number of cases shows “no signs of slowing” even though the Chinese government has implemented draconian measures in a desperate attempt to contain the virus. Many in the western world continue to insist that this disease is not any more dangerous than the common flu, but the Chinese never locked down entire cities for the flu before. “All Wuhan cremation chambers are working 24 hours.”

China issues formal threat of DEATH for those that don’t comply with quarantine.

Recent announcement by Chinese judicial officer: Fail to report recent trip to #Wuhan may be charged Offender may receive severe punishment, even Death!

Chen has been missing for more than 24 hours...

A new Starbucks U.K. campaign seeks to promote acceptance of sex change in young teens by encouraging them to give baristas their “new” name when they purchase coffee so it can be “called out” in the store...  https://www.breitbart.com/politics/2020/02/05/transgender-woke-starbucks-coffee-campaign-promotes-sex-change-for-teens/

Alabama Bill Would Bar Enforcement of any Federal Red-Flag Laws

A bill filed in the Alabama House would prohibit state enforcement of any federal “red-flag” laws, setting the foundation to nullify any such measures in practice and effect. Rep. Andrew Sorrell (R-Muscle Shoals) filed House Bill 123 (HB123) on Feb 4. The legislation declares that federal red-flag laws or “extreme risk protection orders” are “void and of no effect” in the state of Alabama. Such a declaration would have little effect in practice, but the bill also includes provisions that would make federal red-flag laws nearly impossible to enforce in Alabama. The proposed law would prohibit any agency or any political subdivision of the state from accepting any federal grants to implement any federal statute, rule or executive order, federal or state judicial order or judicial findings that would have the effect of forcing an extreme risk protection order against or upon a citizen of Alabama. It would also make it a Class D felony offense for any individual, including a law enforcement officer, to enforce a federal extreme risk protection order. In effect, this would bar state and local police from enforcing a federal red-flag law, rule, regulation or other measure.  https://blog.tenthamendmentcenter.com/2020/02/alabama-bill-would-bar-enforcement-of-any-federal-red-flag-laws/